Note from Racketboy:  We don’t make a habit of promoting Kickstarters or other upcoming product too much, but sometimes, it’s hard to not get excited about some.

In the far flung past of the year 2001, I spent $50 on Liksang to import a device called a Super Smartjoy.  This simple device adapted a Super Nintendo/Super Famicom controller so you could use it on your computer via USB.  I beat many games with the adapter and to this day it sits beside my primary gaming PC.  Over the years I became a connoisseur of USB adapters here in Racketboy tower.  If it was a mainstream console, I most likely have an adapter: NES, SNES, Genesis, Saturn, Dreamcast, Playstation 1&2, oXbox, and even Neo-Geo.  At my height, I had over two dozen adapters at a cost of around $500.

One day when I was searching for a Turbografx/PC Engine to USB adapter I happened to find the Blissbox.  At the time it was the only TG16 to USB adapter that I could find, but sadly it was just too expensive for me to justify.  So I did what anyone would do in the situation, I convinced a friend to purchase one.  A few weeks later this device arrived.  It was a simple black box, functional not elegant, but it had ports for 10 controllers.  We plugged it in and within moments were playing Battle Lode Runner with a proper TG16 controller.

Flash forward to 2015 and now there are plenty of ways to buy controller adapters. Mayflash makes a whole slew of them and there is the amazing work of people like Raphaël Assénat (www.raphnet.net), Bruno Freitas (www.brunofreitas.com), and Bunnnyboy at (www.retrousb.com) – Bunnyboy is actually creating his own HD NES with wireless controllers which will be awesome when it is released.  But in the end, you still end up with a dozen adapters, or a hybrid creation.

Our good friends at Blissbox recently started a Kickstarter for their new device, the 4 play.  Instead of having a device with a dozen ports off it, or a dozen adapters, it is a single device with four ports.  Those ports take adapters built into small cables.  This simple and elegant device fixes many of the issues that we had with our adapters.  Not only that, it fixes issues we did not know we had: for example emulators will now be able to send data to the controllers for devices like the Dreamcasts VMU and GBA-GC Link Cable.  It will also mount as a Human Interface Device (aka HID) so it will be compatible with all most operation systems (Windows, OSX, Linux, Android), and devices such as the PS3.  Yes this means your Ouya or Raspberry PI based emulation setup will take original controllers.  Best of all it is one device for four players. 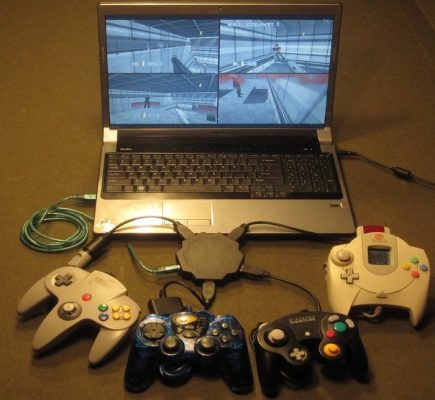 The Kickstarter is live and they are only looking for $75,000 USD to get the product out to consumers by the end of this year.  Personally I backed them at the $95 level.  When my adapter arrives I plan on doing an in-depth review and throwing it through a barrage of tests with my oddball controller assortment.  From Samba De Amigo Maracas, to the N64 Densha De Go Controller, to the Vectrex 3d Imager, we will see what it is made of.

From many comes one. 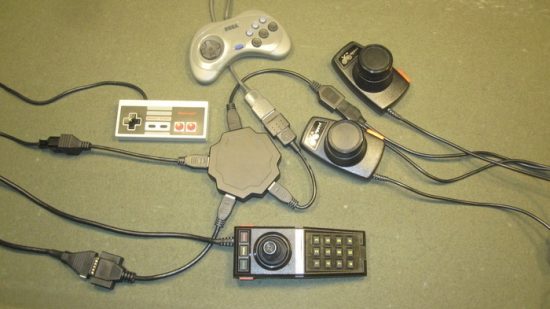 All the small adaptors will be included? As long as there’s no input lag, I’d be in to buy one. Unfortunately, that’s something that wouldn’t be known until the device is out and community tested 🙁

This is pretty awesome. I bought a blissbox a while back, too – a custom 12-port beast at that. 🙂 Unfortunately, the older models like mine don’t support multiple controllers (simultaneously), so I’m thinking about throwing down for this as well. Plus, my interactions with the guy behind this, Sean, have all been positive, so I’d like to see him succeed here.

Thanks for mentioning this. I hadn’t seen news about it elsewhere.

No its known, This from the Bliss-box.net team (making adapters since 2007). The leg is equal to raphnet. Most call this leg free but there is no such thing on a computer. If you need more info read this.
http://www.reddit.com/r/kickstarter/comments/2zczs5/the_retro_gaming_device_and_my_kickstarter/cpj0i93
You can order the box with as many “cables” as you like. These cables are not adapters, the brains are in the box. Cables are cheep and will be available after the KS (if funded) for maybe near $2!

Here is a review
https://www.youtube.com/watch?v=sHHZAkWgFMQ

this product is amazing, im going to sharing this with all my friends. ive met sean and hes super pasionate about this product which make me excited to see. thank you bliss box