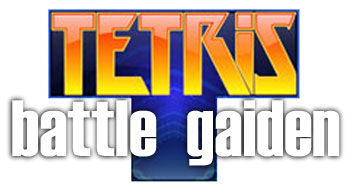 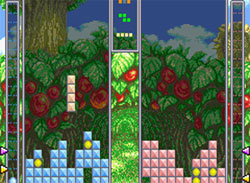 Note from racketboy: fastbilly1 shares one of his favorite hidden puzzlers from the Super Famicom (SNES). I admit that I had never heard of this game, so I want to thank him for pointing this gem out.

It is always nice when you have a craving to play a classic games like Tetris, but end up discovering a relatively unknown spinoff that is just as amazing as the original. In this case, the undiscovered gem is Tetris Battle Gaiden.

With a quick look it would appear just like any other Tetris clone. On the surface, Tetris Battle Gaiden appears to be a shallow game with a tacked on theme that would leave me longing to play the original. For some time, I was a big puzzle game fan and thought I had played almost every variation of the classic (and yes most of them are the same). However, this Japanese-only Super Famicom release, snuck by.

Blue Planet Software (Also known as Bullet Proof Software – Tetris for the Gameboy, Faceball 2000) released this game in 1993 to little fanfare. (Go ahead, Google it, see if anything comes up other than ROM sites). It is understandable that this slipped under most of our radars. I mean, this was before the internet was main stream and well before emulators were decent. I would say it is akin to Wrecking Crew 98, Battle Lode Runner, or Panel De Pon, but all of those have been given more limelight than this discarded beauty.

Enough reasons why you have not heard about it, let’s get into why you should care about this gem. Imagine a game where you combine the best parts of Puyo Puyo and Tetris. (For those who do not know about the Puyo Puyo series, imagine if Columns and Super Puzzle Fighter were combined). Essentially, Tetris Battle Gaiden is Tetris with Super Attacks and Power-ups added to the mix.

Each character in the game has four levels of power that do anything from blind the opponent to clear out lines. However to use the powers you have to obtain power orbs that are mixed into the normal pieces.

Another twist in Tetris Battle Gaiden is that the piece pool is shared. So if you see an orb-lodged piece it is usually a frantic rush to be able to grab the piece. Once you have one placed, you need to complete that line so you can obtain the orb. Each orb gives you one level toward your powers. Like I said previously, you have four powers, meaning four levels. The powers are activated by pushing up and then the fun begins. 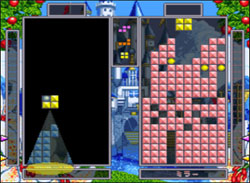 To explain the powers better I will use my favorite character, Halloween (the pumpkin), as an example:

As you can see they go from utterly broken, level 4, to useless, level 2, all 8 of the standard characters are like this (the two hidden characters, Dragon and Queen, are just broken all around).

Sure the story mode is tripe, it is a Tetris game after all, but the gameplay is absolutely amazing. Several of my casual gaming friends who love Tetris have stated they will never play this version because it implements to much “luck” into a game of skill, but all of my gamer friends have switched over the bulk of their Tetris gaming to this version. It is a little kooky, a little childish, but man is it fun.

To get a better feel for the game lets take a look at a video clip of the game in action. Be aware that the players are competing at a relatively slow pace — the game can get much faster and intense.

I have this cart. It’s a great game.

hmm, never heard of this one. i should try it out

Sounds like they did a update for this on dreamcast, As played a ntsc version that sounds the same. Was very good.

to see it been played 🙂

shows the vs mode.

Hey I’ve been playing this game and I have no idea how to make any of the character’s attacks come out. I’ve tried pressing all of the buttons and I think one time I managed to make the rabbit’s attack come out with a hadouken motion. Please inform me how exactly one pulls off the moves because I am way confused haha

Hey Andy, you only have to press up on the D-pad (or up arrow if you are playing on PC) to make the attacks launch. You must also have cleared lines with the orbs in them. You will know if you have orbs stored up because they will show in the side bar next to your play field.

How do you unlock the hidden characters?