Sega as a whole has had a hard time living up to their innovative and dazzling legacy. Many of Sega’s most established developers such as Yuji Naka of Sonic Team and Camelot Software Planning of Shining Force fame have left the Sega fold, leaving large voids in Sega’s quality lineup. One of the few development houses that is holding up is Sega’s AM2 division. Some of Sega’s best works of recent years have come from AM2 such as the Virtua Fighter series, Shenmue, the Outrun series, and the new After Burner Climax. And while many of Sega’s remakes (such as the Sega Ages series) have been disappointing, AM2’s treatment of Out Run and After Burner has been top-notch in terms of modernizing the graphics and experience, while preserving the original arcade gameplay. With the moderate success of these remakes/sequels, you can’t help but wonder if another one of AM2’s frachises may be next.

The next logical franchise for AM2 to update would be the popular arcade motorcycle racer, Super Hang-On (Daytona USA being after that). Of course, it’s a lovely coincedence that the other day there was a posting on French gaming website, Neo-Arcadia, in regards to Sega’s upcoming games to be shown at this year’s Japanese arcade AM Show (formerly the “Jamma Show”) which just happens to mention Super Hang-On 2.

What’s also interesting is that this actually isn’t the first time Super Hang-On 2 has come up. Over a year ago, in my piece Classic Game Franchises We May See Soon, the trademark for Super Hang-On was renewed by Sega. Between these two pieces of information and AM2’s recent history, I would say that Super Hang-On 2 could be a very strong possibility. We should find out if this is for real in a couple weeks as the AM Show will be held between September 13th and 15th.

Just for fun, lets take a look back at what AM2 has done to enhance both Outrun and Afterburner (with some review excerpts and screens), and what the transition could be like for Super Hang-On…

A Look Back At Out Run 2

“When the original OutRun was released in 1986, it became an instant classic to racing fans. The cherry-red convertible Ferrari with the female passenger gave OutRun a distinctive look, which is almost iconic in its recognizability today. With the release of OutRun2 on the Xbox, Sega has effectively recaptured the magic of the original game. While it may not offer the sophistication of other racing games on the market, OutRun2 has an old-school sensibility that makes it both appealing and addictive. A wealth of content and an online mode add to the game’s great value as well. 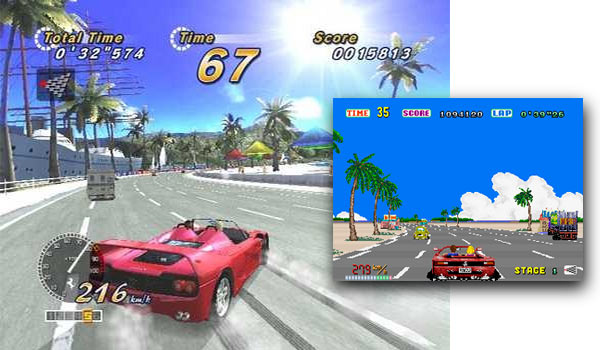 First and foremost, OutRun2 looks and sounds great. The cars are accurately modeled, down to the placement of each wing, spoiler, and body scoop. You’ll see your tires smoke as you drift around corners, and your car kicks up grass and dirt if you veer off the road. Each of the game’s stages is fun to look at and drive through, and they offer a ton of variety. Tracks include an Egyptian desert complete with pyramids, a majestic European castle, and a Parisian street stage that ends at the foot of the Arc de Triomphe. Most importantly, OutRun2’s frame rate holds up well, even with a lot of traffic onscreen. With all of these objects whizzing by you, the game delivers a pretty good sense of speed. OutRun2’s sound effects are also pretty good all around, whether you’re listening to the different car engines rumbling or tires squealing on a powerslide. The game’s whimsical pop music soundtrack fits the game’s carefree theme well, and fans of the first OutRun will recognize remixed versions of the original songs.”
Gamespot’s Review of Out Run 2

A Look Back At Afterburner Climax

There are those who see some sort of connection between OutRun 2 (2003) and this new After Burner. On seeing the first images of the game emerge late last year, Gary Cutlack of UK Resistance ecstatically called it “OutRun in the sky”, and back then I was inclined to agree. But after actually playing the game I can say with certainty that there is no connection between the two, beyond the fact that both are gorgeous remakes of Sega classics. Because the lasting appeal of the joyride that is OutRun 2 is certainly not replicated here, nor was there any such intention on the part of the developers. In Climax there is little joy to be found in simply flying around — take away the enemies and all there’s left is an empty sky above you, and colorful surfaces zooming past beneath you. The risk involved in being allowed to crash your fighter on the ground; flying bombing missions and zigzagging between skyscrapers and through canyons — being able to do things of this nature would have been equivalent to the endlessly enjoyable drifting of OutRun 2, but my guess is that these ideas never even entered Kataoka’s mind. So what was true before remains true still: if OutRun is about the joy in driving, After Burner is about the joy in shooting — not flying. 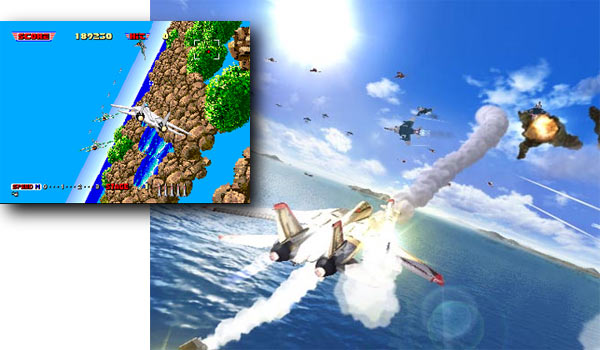 After Burner Climax is still a title that no fan of the arcade experience should pass up on the opportunity to play, should the opportunity present itself. But, like the original, it lacks the universal appeal of an OutRun, or the depth necessary to make it more than a quick diversion (it’s telling that, though I spent several thousand yen on it, I never felt like playing more than a couple of games in a single session). Improving your score and kill ratio can be fun for a while, but progressing through the game is not as enjoyable as in the more diverse on-rails shooters, such as Rez (2001) and the Panzer Dragoon titles (consider that Climax doesn’t even have any bosses to break up the monotony of the endless popcorn enemies). In the end, Kataoka did manage to make something as good as After Burner. Too bad he didn’t make anything better.
Insomnia.ac’s Review of Afterburner Climax

It has been almost a year since After Burner Climax’s release and while it is rumored to run on the same Lindbergh arcade hardware, we may be able to see Sega push the system a little harder. Either way, Super Hang-On 2 should be an arcade racing stunner. In addition to the enhanced graphics, there is no doubt that we should see the same type of racing enhancements that we saw in Out Run. While we obviously won’t have drifting with a bike, Sega should be able to come up with some ways to add depth to the racing engine without sacrificing arcade simplicity. 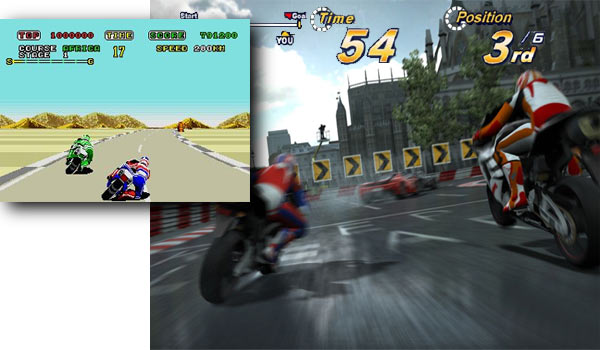 Now, I have to admit, the screenshot above it actually one from Project Gotham Racing 4 with graphics from Outrun 2 Photoshoped on the top. But it’s enough to get your imaginations racing, so to speak, about what we might be able to expect from AM2.

“Many of Sega’s most established developers such as Yuji Naka of Sonic Team and Camelot Software Planning of Shining Force fame.”

This sentence is missing a verb. Other than that, great article.

I doubt that SHO2 would really look anything like PGR3. The original SHO’s feel was dependent on the sparse desert environment where it took place, and the clear sky above a low horizon. Based on how similar the other two remakes you mentioned were to the originals stylisticly, I imagine Super Hang On 2 would follow the same pattern.

Another great Racketboy article.
Awesome work.
As far as bike racers from Sega goes. I like Manx TT for the Saturn. It’s the second best racing game for the Saturn. (Sega Rally #1)
Great news.
Great mock up screenshot!

Well I’m not on top with modern games too (and almost all games anyway, driffting away from them) but PGR is an exception, really nice game. Anyway I doubt Sega, even if done by AM2, will ever do anything as polished as Bizarre’s PGR, IMHO it takes more skill than what laughable Sega has and a possible Hang-On 2 wil be more something like Outrun 2, it’s cool but lacks the depth PGR has.

Anyway, nice photoshopping, but if SHO2 is ever going to happen, I sure hope if follows the vibrant colourful aspect of OR2, not the grey, realistic look of PGR.

By the way, anyone else misses the good old arcade racing games, with imaginative tracks and crazy cars? Nowadays we only have Need for Speed (a series that should have died a long time ago, IMO), Burnout (which became crap after passing into EA’s dirty hands) and PGR (the best of the bunch)…

”Burnout (which became crap after passing into EA’s dirty hands)”

dont agree with you at all, i think you are confused: all butrnouts developed by Criterion Studios remain 10/10 games… now Burnout Dominator developed by EA London is somewhat worse… but the upcoming PS3/360 Burnout Paradise is done by Criterion so i am cool 🙂

No, I’m not confused at all. Let’s put it this way:

With B3 comes EA, well known for milking successful series. What comes next?

Burnout Revenge – nothing more than an expansion of B3