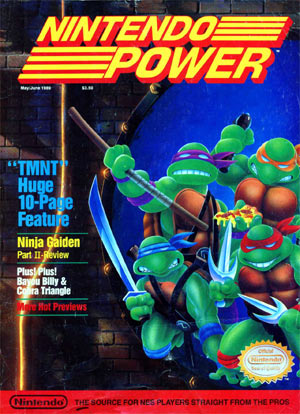 This issue of Nintendo Power gives us a peak into many of our childhoods during 1989. Teenage Mutant Ninja Turtles all but took over the world as the 80s came to an end and I couldn’t wait to get my hands on the first Turtles video game. Unfortunately, Konami’s first try at bringing the Heroes on a Half Shell to the NES was an ultra-challenging game for the average NES owner and didn’t quite have the fun and flair that we were used to in the cartoons. If you do, however, want to give the game another try, or just relive some memories, this issue has a great guide to the game.

This link takes me to Game Players magazine…

Link should be fixed now

Reply
Pingback: Scanned: One Of The Best Nintendo Power Issues Ever
Pingback: Convergence » links for 2007-09-11
Pingback: PoisonMushroom.Org - Combing the Net So You Don’t Have To » Blog Archive » Points of Interest - 9/11/07

watch the nintendo nerd, and see what he has to say about TMNT for the NES.

ITS BROKE AGAIN
THEYRE ALL BROKE
THIS SUX.

Right now it appears like Movable Type is the best blogging platform available right now.
(from what I’ve read) Is that what you’re using on your blog?