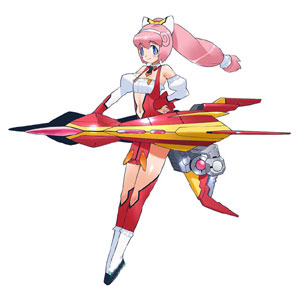 Otomedius
One of the biggest stories of the show is Konami’s apparent successor to the Parodius franchise. it has the same quirky and sexy feel, but also will include networking and touchscreen capabilities (supposedly for locking on enemies). Could a DS port be in the game’s future?
More Pictures at GameWatch
YouTube Video

Exzeal
This new shmup from Triangle Service is essentially the sequel to Trizeal and will also be most likely running on NAOMI. Is a Dreamcast port too much to ask for?
Arcade Cabinet Picture
YouTube Video #1
YouTube Video #2

Similar Posts From These Categories:
Shmups

Otomedius: Seems nice but I don’t want a DS port because I don’t wanna turn blind trying to find bullets on a tiny screen. Plus the lock-on attack seems to freeze the action (check the end of the movie) so it can be done with the analog stick as well.

Exzeal: Trizeal was garbage, this might be better, we’ll see.

Muchi Muchi Pork: I have mixed fellings about Cave, they like to over abuse fast and screen filling bullet patterns. But you never know, might be cool.

That said at least we are seeing some new shmups.

Trizeal is insanely fun, and kills all the recent raiden games imho. Don’t listen to the sea of cave fanboys and gfx whores; try it for yourself.