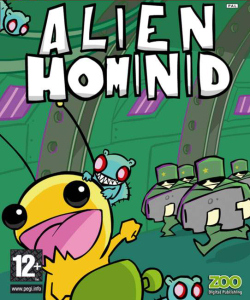 I have to say, I feel a bit guilty for not reaching this point earlier. I covered the progress of the console ports of Alien Hominid since it was first announced that the indie Flash game would be coming to the big three home game consoles. I’ve played the game a bit in the past, but never really got to devote much time to it.

This past week I am finally able to sit down and get back into gaming for a while. I used my free coupon from my monthly Blockbuster Online membership and rented Alien Hominid. (I really wanted Mario Baseball, but they didn’t have it in stock yet).

At first, I enjoyed the game as a whole, but I quickly got discouraged by the difficulty level. As many people will point out, the game tends to have a lot of cheap shots if you aren’t careful. I almost gave up on the game after the second level. However, I discovered that part of the joy in this game is finding paterns and weaknesses in your enemies. While patterns are usually frowned upon by modern game developers that promote realistice AI, this type of gameplay brings back memories of platformers from the 16-bit era. I found myself having the most fun with a platform-type game since I first got my Sega Genesis with Sonic 2.

I’m amazed by how much creativity and variety that the developers have shown in not only the level design, but also with the bosses. You can tell the game wasn’t thrown together in order to make a quick dollar. While it is heavliy rooted in Metal Slug-like gameplay it combines the art style and level/boss design in order to present a fresh look and experience with this genre. 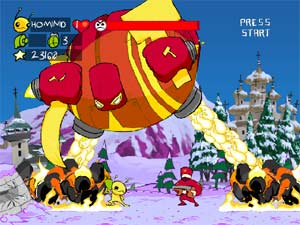 It also helps when your spouse or significant other enjoys the game. My wife and I have been having a blast (quite literally considering all the explosions in the game) utilizing the two-player mode. We both enjoy not only the old-school gameplay, but the playful art style and the goofy storyline. So now instead of getting dirty looks and/or lecturing about how much time I’m spending on a game, my wife actually suggest playing the game!

Needless to say, I’m looking forward to what The Behemoth has on the way. As I mentioned a while back, they have a new console title on the way that is heaviliy influenced by the hack-and-slash adventure, Guardian Heroes. They also have a new Flash game that is a humorous take on the beatemup genre — Dad N Me. It’s great to see an indie developer bringing a fresh looks to otherwise dying genres!

‘newgrounds.com’ has heaps of good games by the guys who made alien hominoid and other free lance developers, one of my favourites is “Barbarian bob”, you can play it for free, yeah!

I want to reiterate what the author said, that this game really shines with couch co-op.

I originally bought this close to release date on the PS2 based on the hype surrounding its release. My kids were babies then, and like the author I was playing solo and found it to be brutally hard. I eventually sold it on ebay, having decided it just wasn’t for me.

Years later, when I scored an old Gamecube and started building a library of games to share and play with my kids, I picked up the Gamecube version on a fluke, figuring that my kids should have the opp to be exposed to a wide range of games, even ones that I might not be a fan of.

My son latched onto this game, and asked me to join in–I wasn’t expecting much, but ended up being blown away by how fun the co-op was. That was when Alien Hominid went from a so-so game to one of my all time favorites. I even imported the EU GBA cart, I loved it so much.