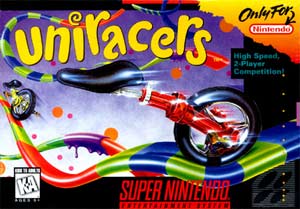 You wouldn’t know it from the screenshots, but Uniracers is one of the most fun racing/stunt games on the SNES and possibly the 16-bit era as a whole.

Unfortunately, even in the 16-bit era, the gaming kiddies were mostly interested in cool graphics and such. Combine that with the unusual name and its understandable why this SNES classic didn’t succeed in the mainstream.

Fortunately, due to emulation and the collection of cheap classic games and systems, we can give these diamonds in the rough another chance.

Review Tidbits:
“It’s not often that there’s a video game starring unicycles that do amazing stunts, but for one brief moment in 1994 Uniracers attempted to rectify that wrong. Set in a colorful 2D world, unicycles race one another across a series of colored bars that serve as the track, almost like Excitebike, but without the four lanes to navigate. The track often leads to large ramps to launch the unicycles to the next portion of the raceway, while other times it’s covered in pink slime that acts as a velocity killer. Then there are the traditional boosters that provide a quick burst of speed or sudden U-turns that seemingly come from nowhere. In the middle of all of the speed and track navigation comes Uniracers‘s unique claim to fame: tricks.”
PressTheButtons 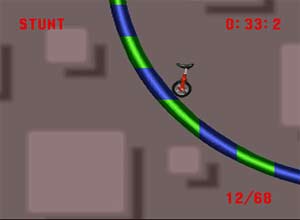 “It takes long time to learn all the different stunts and combinations and last but not least all the courses, so that you know where the various obstacles like clay and stuff are placed and where the free open spaces where you can safely perform your stunt are. this is the main drawback of the game because it can easily get boring to try to memorize all the games around 20 courses but on the other hand it makes this game a real challenge with long last ability. The 2 player mode is a welcome option in Uni racer as it´s many times more fun racing against a friend than an boring and predictable computer.”
Nintendoland

“There are three difficulty levels, 9 different circuits, and 5 different tracks on each circuit. Two of said tracks are always of a “get to the finish line first” mode, forcing you to rely on quick reflexes and taking advantage of areas where you can build up speed. Two more are laps, so that memorizing the shorter track and repetitious excellence are required. And the final one is a stunt track, a place to show off your moves and gain enough points to qualify. Stunts, namely flips, twists, and rolls, are rather simple to pull off, but a variety and number of them are required to get the points you need. These stunts are also useful in the racing levels, as any successful stunt will bring you a much needed burst of speed. And you’ll need them, as there is no acceleration button or braking or sliding or anything of the sort. See, the tracks are 2-D, with a view like any side scroller. You merely hold down the direction you want to go in!”
Mariner @ GameFAQs 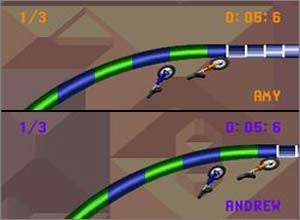 “The graphics have very little detail. Really, the only things that move in the game are: the background, the unicycles and the track itself. But the reason for such little detail is most probably not because of lazy artists, but because that the game is so fast that you wouldn’t have much time to see anything non-moving! Another reason that the graphics are of a lower standard than most games made around that time, is because that less detail equals a much faster game. The graphics aren’t that bad in this game, but it could have been made better by more detailed backgrounds. The sound in this game consists of drum and guitar music, and suits the game well. There’s also nice sound effects for when you do tricks; the bigger the trick, the better the sound. A few speech effects would have been nice, but as I said before, the music and sound effects suit the game well enough as it is.”
THayes @ GameFAQs

I remember renting this at blockbuster years ago. Very fun, and unique at the time.

That was absolutely one of the best multiplayer games for the SNES. I didn’t think there were many tricks a riderless unicycle could do, but this game was the Tony Hawk of its day.

this game was my childhood

i never could remember this game but i remember playing it for hours when i was younger. best time.

Reply
Pingback: Favoritist Is Too A Word! » pyn.me