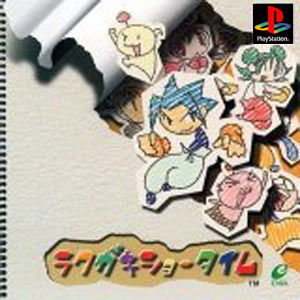 I’ve talked about a couple of arena battle games like Power Stone and Poy Poy recently, but I thought I would also mention one little-known Playstation game (that was only availible in Japan) by everyone’s favorite old-school developer, Treasure.

As opposed to the 3D graphics in Power Stone and Poy Poy, Rakugaki Showtime takes a more 2D-ish approach by using a paper-like technique made popular in the Paper Mario series.

This little gem from Treasure has lots of charm but is, unfortunately, a bit light on depth. You’ll also be a bit light in the wallet should you choose to buy an original copy on eBay, as Rakugaki’s going price is over $100. (It was listed as an honorable mention in the Holy Grails of Console Gaming)

Review Tidbits:
“As usual, Treasure has tried to create an original game, and thrown in a bunch of wacky ideas to top it off. You know, zany characters in some crazy game where the action never ceases. Well, basically it’s just a party game for up to four players where you run around a small arena while picking things up and throwing them at each other. It’s similar to games like Bomberman 64’s multiplayer, or Poy Poy (probably, never played that game but you picked u 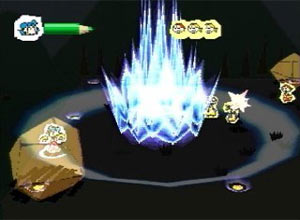 p stuff and threw it at each other right?). Anyway, it can get a little frantic, and more often then not the screen is just a mess of scribbly explosions, and you can’t really tell what’s going on.”
Treasure Fanpage

“As fun and different Rakugaki is, its decidedly Japanese graphics are unlikely to appeal to many. The characters look as though they’ve been doodled on paper cutouts, with hastily scribbled colors constantly shifting within their crude borders. While the backgrounds are fully 3D, they’re largely untextured and flat in appearance. The simple graphics do give the game a certain weird charm, however, and also allow for the fast and furious gameplay that makes the game stand out in the first place. The game’s music is typically Treasure, mixing up a bevy of happy tunes with an odd rock bent. The game’s sound effects go mostly unnoticed, with the exception of the aforementioned “Hallelujah!””
Gamespot

“Rakugaki Showtime lives up to Treasure’s high standards because of its exceptional game design and uniqueness. In Rakugaki Showtime, one to four players go at each other in a free- 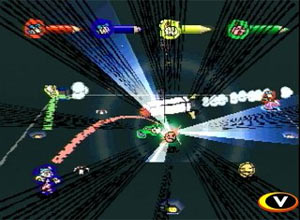 for-all slugfest that makes one hell of a multi-player party game. Not only can the player use a wide variety of objects and weapons to take out opponents, but he or she can also use other players as weapons by throwing them. One of the most unique characteristics of Rakugaki Showtime is its bizarre graphical style. Instead of the 3D modeled characters that are the norm in today’s games, Treasure opted for flat two-dimensional characters with a peculiar colored pencil style of art. The chances are that you have never seen another game that looks like Rakugaki Showtime.”
IGN

I’m so addicted to this game. Everytime a friend of mine comes to play to my house, I always ‘force’ them to play this ‘tawuran’* game.. I especially love the 2D theme.