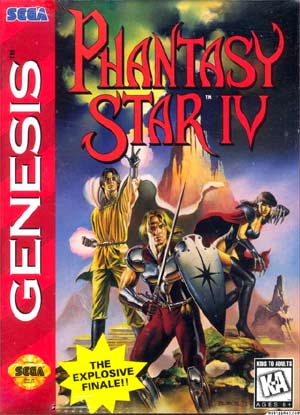 Sega has developed a small handful of solid RPG franchises such as Shining Force and Skies of Arcadia, but if there is one Sega RPG series that has the largest cult following, it would be Phantasy Star.

The Phantasy Star series made its debut on Sega’s 8-bit Master System, but it had 3 sequels on the Sega Genesis/Megadrive — the last of which, of course, is Phantasy Star 4.

After a short departure in Phantasy Star 3, part 4 makes a return to what made the series great, resulting in one of the finest RPG experiences on the Genny.

Review Tidbits:
” Everyone who was disappointed with Phantasy Star 3’s departure from the series (both in storyline and style) will be pleased to note that it’s been fixed in Phantasy Star 4. The graphic style of the overhead world and towns very much resembles PS2, but much more detailed and colorful. The battle scenes are also the behind-the-back view, with backgrounds rather than that silly grid. The monsters look and move quit a bit cooler than their wimpy PS3 animations. They tend to move quite quickly, so battles really don’t seem too repetitive or annoying. While fighting, you can assign attacks individually or set up a macro for each character (you can have as many as five at any given time) to execute a certain action (attack, defend, technique, etc.) There are also combination attacks vaguely similar to Chrono Trigger, where two or more characters combine their attacks to form a super weapon. However, you need to discover these attacks on your own (or cheat and find them on the Internet)…they aren’t handed out to you.”
System 16 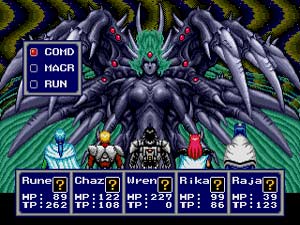 “The graphics are for the most part excellent. Both the detail and animation of both the player characters and the enemies is outstanding. Some enemies have several different animations for different attacks. Spell graphics are effective but a bit mundane and samey – they could have been a bit more spectacular (but then this game did predate Final Fantasy 3 in Japan…). The most outstanding graphics in the game are reserved for the anime cut scenes that move the story along. They are all marvelously rendered and there are so many of them it’s easy to see where all the game’s megs went. The ending alone probably wouldn’t have fit on a first generation cart!”
RPG Critic

“One touch I rather enjoyed in Phantasy Star 4 was the aforementioned Combination Attacks. As an example, let’s say Chaz uses the Tsu Technique, Alys uses Foi, and Hahn uses Wat — if they act in that exact turn order, they’ll execute the Triblaster attack, which is far more powerful than the techniques alone, and damages all enemies on the screen…. When all’s said and done, Phantasy Star: The End Of 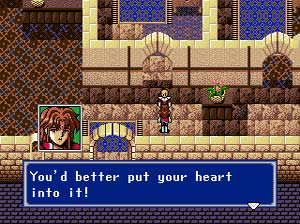 The Millennium is a somewhat easy game that relies more heavily on its characters and plot than the need to level constantly to move the story along. Hardcore gamers seeking a challenge might want to pass this one by, but for anyone who’s played the previous Phantasy Stars for their story (as hard as this might be to imagine), or for those who just want an involving (if not too hard to advance) plot, I can heartily recommend giving this game a try.”
RPGRealm

One of the greatest RPG’s ever. Helpfully washed the taste of PSIII out of your mouth and returned it to form =)