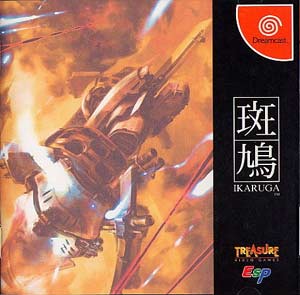 You will find that I bring up the development house known as Treasure quite often — and for good reason. They are behind many of the best cult-classic games of all time and know how to feed the cravings of hardcore gamers — sometime before the audience even knows what it is that they crave.

Treasure followed up its success with Gunstar Heroes and Guardian Heroes with it’s first space shooter, Radiant Silvergun. RS was known as possibly the greatest shooter ever and gamers were waiting for its successor. While it may not be an official sequel, Project RS2, later known as Ikaruga did not disappoint shooter fans.

Instead of relying on the ground layed by Radiant Silvergun, Ikaruga took a significantly different path to provide a compelling, but sometime frustrating shooting experience. While simple at heart, Ikaruga is a masterpiece that is now a platform for shooting experts to show their skill (or their memorization prowess).

If you want a good challenge, you need to give this game a try. Even if you aren’t normally into shooters, Ikaruga will require you to hone your reflexes and will intrique you with its puzzle-like gameplay. As I can attest, it can be frustrating, but it keeps drawing you in for more. 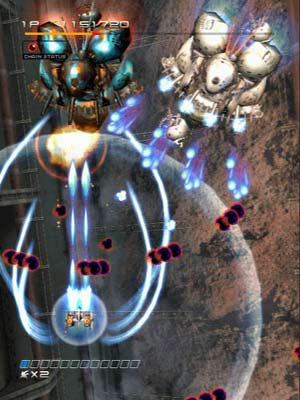 Review Tidbits:
“To really appreciate Ikaruga, one must understand how the game works. There are no pick-ups, no power-ups, and not a single fairy in the whole game. Instead Ikaruga uses a single fire button and a Homing Laser button. There are two types of enemies and enemy fire: dark and light — no more, no less. A third button switches the ship from dark to light. When the ship is “dark,” it can absorb dark projectiles but is susceptible to light projectiles, and vise versa. This is the gameplay mechanic that’s borrowed from Silhouette Mirage…
To really make it through the game requires a different way of thinking. It’s almost like mentally “blocking out” projectiles that correspond with the ship and avoiding the opposite color. The idea of switching is easy, but doing it on the fly is another matter and requires practice. There’s a certain satisfaction in being able to simultaneously fire and switch back and forth while avoiding enemy ships and structures.”
IGN

This is a deep, mesmerising, solidly balanced game featuring an inspired design. It has an unrelenting pace that is sure to appeal to hardcore gamers who appreciate the pure, unadulterated adrenalin rush that only something like Ikaruga can serve. As you progress further into the game, the attack patterns evolve and mutate and that’s when it finally hits home – you’re hooked. As you dispose of ever more challenging enemies, fuelled by the strange, hypnotic voice and the sweeping grandeur of the music, you may indeed exclaim (as Treasure’s CEO Masato Maegawa once commented) ‘Ghaaagh – this is it!’
NTSC-UK

“Ikaruga’s gameplay is extraordinary, wicked yet addictive and the game’s 3D graphics are breathtaking and more than get the job done for a game with 2D play. Ship designs are beautiful and unique and though the color department isn’t very assorted, it’s enough to look good and not confuse when color is a crucial element to success. The action is fluid and fast without any real slowdown, speed is determined by the player and the controls (one of the most important 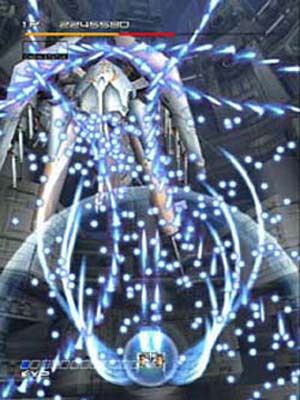 aspects of any game), don’t get in the way either (and thankfully, as the game can really push the limits of your skill). The music is reminiscent of earlier games of this type and the sound effects do it justice. I’m pleased that the package is so well rounded, the only flaw is the fact that Ikaruga has a habit of getting real tough, but I like a good challenge.”
Gamers Logik

“[The Gamecube version of] Ikaruga supports progressive scan and widescreen. Additionally, there is an option to tilt your TV sideways so that you may have a full vertical view. The sound is unlike anything you’d expect from Treasure. With a history of using cutesy tracks in their games, it’s quite shocking to hear the futurist techno samples that are used in Ikaruga. The game also contains robotic-voice samples for combos and certain items on the menu screen. Everything sounds very good, from explosions to fire blasts.”
GameCubicle

It’s my favorite shmup and the one that got me into shmups, even though I’m not terribly good at them. It’s really amazing to watch someone who knows what they’re doing play this game (especially once you know the mind bending state it takes to navigate back and forth between light and dark).

Ah…yes… Ikaruga. The best shooter to grace mankind and the Dreamcast.

Oh and Chris J, it isn’t such a difficult game you know. Even I finished it in less than a week…

I’ll never agree with those who say Radiant Silvergun is better than Ikaruga. Silvergun’s gameplay is best appreciated for it’s RPG elements, which steals a part of it’s shmup soul. Ikaruga could better become whatever game you wanted it to be.

The only way Ikaruga will be topped is in the upcoming Treasure “shooter” they just announced. Insiders say it’s definitely RS3; the sries had always been planed as a trilogy.

wow….nobody even noticed that the best players kill in chain. Nobody commented on the awesome nature of the cooperative mode.

Nice review.
Ikaruga is just beyond everything. The Dreamcast port is flawless and possibly one of the most polished and well crafted games (overall) on the system.
The concept is simple, there’s no power ups, add-ons to the ship or shít like that. It’s just you (and a friend if playing coop) transforming from bright to dark against a big load of enemies. And that’s where its beauty resides and what makes it so outstanding, because in the end, it’s a labyrinth of bullets and foes, and its exhausting difficulty it only makes it better and better.

Thank you Treasure and Sega.

Ikaruga really is a great game with a great concept, Treasure did a really good job, why cant more games by released like that!