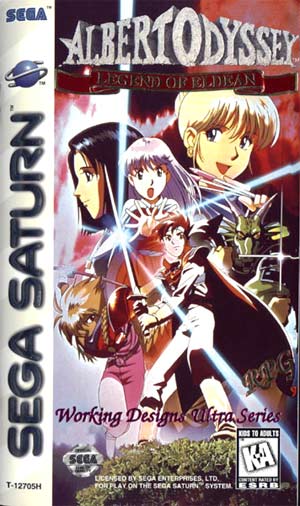 The late, great Working Designs ported many wonderful Japanese RPGs to both the Sega CD and the Saturn for the US market. Among the great lineup of localized games is Albert Odyssey: Legend of Eldean, a colorful title that was originally created by Sunsoft and was the child of a Super Famicom series.

The game itself is standard eastern role-playing fare, with vibrant 2D graphics and turn-based combat. While it isn’t overly challenging, it will remind many old-school RPG fans of the SNES era Final Fantasy games while taking advantages of the Saturn’s 2D graphical power and enhanced audio capabilities.

Review Tidbits:
“Working Designs has done a great job scripting the game, with the right amount of serious story development paced with the comic relief that an RPG needs. Sometimes, the comedy does seem a bit out of place during serious moments, but overall it’s done well and in the right places. One thing I noticed after playing parts of the game a second time is that the dialogue responses and choices you make don’t affect the course of the game at all. Many times dialogue choices are so obvious (usually the right answer is on the top), that they draw you away from the progressing storyline. Answering incorrectly may add some dialogue in spots, but the outcome is almost always going to be the same.

In addition to refining the writing, Working Designs has made improvements to the way the game plays. The Japanese version was plagued by excessive load times going in and out of battles. WD has cut that time by almost half; although the load time still isn’t nonexistent, it is tolerable. Other smaller improvements include cutting down on the frequency of battles, speeding up diagonal walking, adjusting experience points, and cleaning up the menu system.”
GameSpot 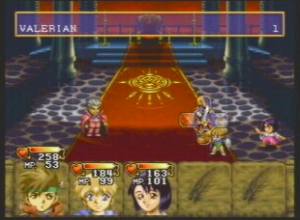 “Albert Odyssey put the words basic traditional turn base rpg to good use here. This is as basic as basic can get. You have up to 5 party members in each battle taking turn attacking, using magic, or special attack. You know the drill. All battle is of course random. The game is very straightforward. You shouldn’t have any trouble with this game at all except for the last dungeon. If a boss is too hard to take down at first, then walk around and level up. I do like the town or world map scene where your guy Pike is walking around. In most rpg games, you only see the main hero.

However in Albert Odyssey, the entire party walks with Pike which makes it more realistic I guess. Square should take a note and have all FF member parties walking with the main hero too. Since the game is so basic, it’s pretty short as there’s really not much to do here. This is one of the drawback. Too short and leaves you wanting to see if there’s anything more to do.”
RPGDreamers

“Albert Odyssey’s graphics are truly beautiful and showcase just how well the Saturn was capable of presenting 2D graphics. Character sprites and backgrounds alike are drawn large and colorfully. The battle scenes are viewed from the side, as in the Final Fantasy series, and this is where Sunsoft really shows off: Characters and enemies have lots of animations! Eka has a different attack for almost every unique weapon she can equip. Spell effects range from simple fire and lightning to more dazzling effects, like the transparent head o 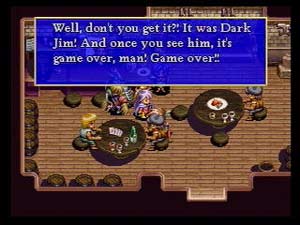 f a giant wolf lunging up from the bottom of the screen, and the Starduster spell which rains down 3D polygonal meteors on its victims. The overworld appears a bit muddy, like Mode 7 gone wrong, but it’ll become apparent why it was done this way when you get the airship: This fish-shaped contraption is easily the most riveting visual in the whole game, as it glides, spins, and zips through the air with spectacularly fluid 3D effects.

Albert Odyssey’s soundtrack is one of the most riveting, memorable, and haunting that I have ever heard. The lush overworld themes are romantic ballads played on real violins (the violinists are credited in the ending sequence.) The town themes are similar in style to what’s been done in previous RPGs (such as Final Fantasy 6 and Chrono Trigger), but seemingly elevated to a new level. The problem with the score is similar to that of Lufia 2: it never really seems to “connect” to anything in the story.”
FlyingOmelette

sweeeet review. I always the game was kinda slow though. I do want to play it through again in 2007.

A Instant Classic. A Must have for all rpg fans

Gotta disagree with you there. Yeah it’s a 2D rpg on the saturn but that’s no reason to instantly call it a classic. It’s incredibly generic and suffers from the usual working designs butche…. i mean destruc… i mean “translation”.

Pretty in parts? for sure, sounds great? yep. Classic? not by a long shot. Read the reviews linked in the article Pyke, the only really favourable one is on a biased RPG zealot website…